The God Helmet Experiments:  The Science That Found God in the Human Brain.  A New Kind of Science Book.

Based on research papers by Dr. Michael A. Persinger. 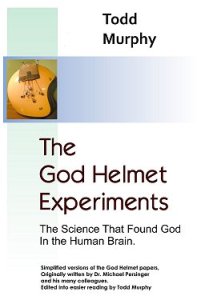 The God Helmet is a technology known for it’s ability to create religious and mystic experiences in the lab, so we can understand the brain’s role in spiritual experiences.

The God Helmet has received a great deal of attention over the years, but much of it has been based on inaccurate media reports.  Very few people read the actual research papers, or understand what it’s inventor, Dr. Michael A. Persinger, actually said.  Neither critics nor supporters seem to have read his actual research papers, partly because they’re very difficult reading.

This book consists of some of his his research papers, re-written on a sentence-by sentence basis, making them much easier to read, so people can see his work for themselves.

The first part has some of his more important review articles, giving an overview of his theories and concepts.

The second part recounts some of his experiments, including his methods, as some critics have falsely alleged that Dr. Persinger didn’t use placebo controls or blind conditions, or that his results were due to suggestion.  None of these are true.

The third part contains answers to his critics, who don’t seem to 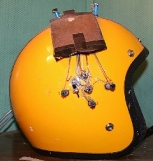 understand his methods or theories.  As this book will show you, their accusations of improper research are completely unfounded.

The God Helmet is famous for creating visions of God in some research subjects, but it’s also been used to create out-of-body experiences, paranormal episodes and to treat depression.  Some of the research publications that cover these striking results are included in this collection of rewritten, simplified journal publications.

It’s still a book of science, so put your “thinking caps” on as you read it.

This is a completely new kind of science book.  Instead of writing about discoveries and trying to describe them, The God Helmet Experiments:  The Science that found God in the Human Brain lets the researchers speak for themselves, and describes the actual laboratory work, one report at a time.

There is a large gap between real science writing (formal journal articles, with their often cumbersome writing style) and ‘pop’ science  books and news reports (often inaccurate and over-simplified).  This book closes that gap, and we hope to see more books like this in other fields.

Dr. Persinger published over 500 academic, medical, and scientific papers, and this book only scratches the surface, with it’s 30 publications (some of them are informal web articles), and we hope to publish further volumes summarizing them.

This is a must-read for anyone interested in the meeting of science and religion, but who want to see the actual science, and not secondhand comments about it.